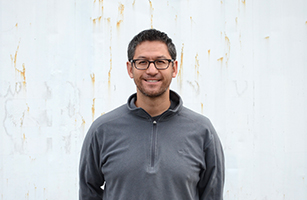 Greg and his wife, Nicole, have attended Threads Church since 2003. Greg has a passion for the 3 M’s:  Music (especially drumming), Medicine, and Macgyver.  He is one of those guys that carried a swiss army knife in his pocket for years — just in case he needed to create a makeshift explosive from sodium metal and a cold medicine capsule in order to escape from an underground bunker controlled by an out-of-control sentient computer bent on destroying life as we know it (see season 2 episode 1 “The Human Factor”). Greg graduated from the University of North Dakota School of Medicine in 1999 and has been working at Bronson Hospital ever since. He is also crazy about racquetball and can be found on the courts at the Maple Street YMCA at 6am every M-W-F.