Threads Church began in 1999, born out of the vision of Lee Rabe to see a church that would seek to intentionally connect with the more than 75,000 people in the Kalamazoo area between the ages of 18 and 35, 95% of whom have no connection with a church community. As he studied this group, Lee and his wife, Kristi, began praying for God to do something to connect these postmodern generations with Jesus. Out of this prayerful wrestling, the idea of starting a new church took shape and Threads Church held their first gathering in June of 1999.

Threads’ innovative and experiential worship gatherings began to attract people hungry to connect with God and each other in authentic ways. Over the years, Threads has gathering in a high school, a hotel and more traditional church buildings. Because of the rapid growth, Threads moved to Portage in Kalamazoo and grew to roughly 450 attending Sunday morning worship gatherings. 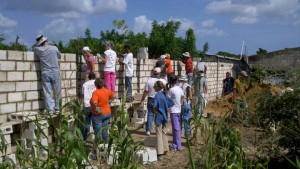 Despite this growth and the many stories of lives and families being transformed, the leaders at Threads began to look beyond the immediate church family for how to partner with God’s mission in the world. This questioning and commitment to mission has led Threads to partner in launching Freshwater Community Church in Paw Paw, MI and Genesis Church in Boyne City, MI.

In addition to church planting, Threads has sent groups to build housing in Tijuana, Mexico and the Dominican Republic, to help in the recovery efforts in the wake of hurricane Katrina and to an orphanage in Honduras. We have also partnered with great organizations like Seeds of Hope and Active Water, working to tackle the global AIDS crisis and provide access to clean drinking water in Africa and Southeast Asia.

On Mission in Milwood 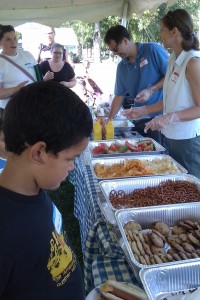 Throughout all this ongoing activity in mission, the leaders at Threads continued to ask questions. How can we come alongside people in our own communities? How do we follow Jesus and stand with the poor? Where can we make a tangible difference for the Kingdom? Who would notice if we no longer existed? The questions led to a time of active discernment, interviewing community leaders and taking note of our own family members’ gifts, skills and passions. Through this process, we identified the Milwood neighborhood in Kalamazoo as an under-resourced neighborhood that had equipped and called us to engage.

Since 2008, Threads has been engaging the Milwood Community through neighborhood block parties, a summer recreation program (Art and Games on the Green), our Kids Hope mentoring program at Greenwood Elementary and missional communities that have sought to connect with Greenwood Elementary School and Milwood Magnet Middle School, as well as supporting and connecting families in various ways. While we remain committed to creative and engaging worship gatherings, this external focus has led to a decline in casual attenders, while those who remain and who have come more recently have been challenged to grow deeper and be more intentional about playing their part in God’s on-going story.

After Lee’s resignation in 2012, the leaders at Threads continued to strengthen our missional communities and be more intentional in forming people as Christ followers through the introduction of our five shared practices. In the Fall of 2013, Kevin Edlefson accepted the call to become Threads’ Lead Pastor, returning to the Threads family after five years church planting in Wisconsin. 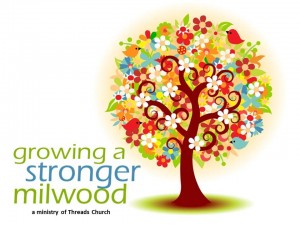 The focus on Milwood has continued. In 2013, God brought a group of people to us who were interested in purchasing our Portage building. After years of prayer and consideration, God was opening the door for us to move into the Milwood neighborhood and serve the community there as residents and neighbors, not outsiders. In the summer of 2014, we took a step of faith and sold the Portage building. Amidst a flurry of answered prayers and with the engagement of so many from the Threads family, God worked out all the details and timing to bring us to our current building on Cork Street.

Our story is filled with so many reasons to give thanks and glorify God and so many signs of God’s guiding care and transforming power! But the story continues and we have many more opportunities in the coming days to be the hands and feet of Jesus.  We can’t wait to see the many new chapters yet to be written here at Threads.